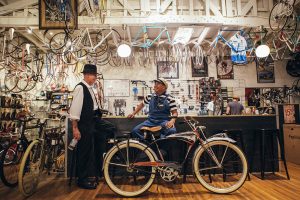 Customer Service: This is Crucial to Both Online and Offline Businesses

Recently I was driving by the location where a bicycle shop once did a brisk business in the city where I reside in southern California. The shop is now long gone, and in its place is a pool supply store. It made me think of the last time I had been there and what had transpired in terms of the customer service I received.

I had been in Los Angeles (fifty miles to the south of me) to visit a client, and had to park several blocks away. On the corner at the intersection where I was crossing was a bicycle shop. It had been many years since I had purchased a bicycle, but I was early for my appointment and decided to go in and have a look around for a few minutes.

A man who introduced himself to me right away as “Tony” took me on a tour of the shop. It was nostalgic to see rows of bikes from the past, such as Schwinn Stingrays with high handlebars and banana seats that had been a part of my childhood and ten speeds with skinny tires like I had ridden during my teen years. He shared the history of the shop, and then asked me some questions to find out more about me and to see if I was a true prospect or just looking. And then it happened.

Tony took me down a long aisle where touring bikes and cruisers were lined up according to color, size, and brand. At one point I stopped in my tracks as I gazed upon a bicycle from a company called Felt. The model was “El Guapo”, meaning handsome or good looking in Spanish. I stroked the seat and the handlebars. I gently pulled the bike out of the lineup to inspect it more closely. At Tony’s urging I sat atop the ample seat and placed my feet carefully on the pedals. I was in love. 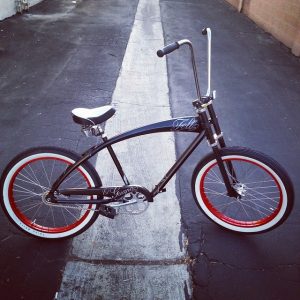 We talked for a little longer and then I needed to leave to walk the two additional blocks to my client’s office. I took Tony’s card and bid my new love adieu. As I exited the shop I gave one last look over my shoulder at what had now become my heart’s desire. Then I put it out of mind for the next several hours to focus on the client I would be meeting with that afternoon.

On my drive back home that evening I drove by the local bicycle shop. I parked in front and then got out to peer through the windows. I couldn’t see the makes and models because it was already dark, but I vowed to show up at ten the following morning to see if they had, or could obtain “El Guapo” for me. I believe in buying locally whenever possible so this just made sense.

When the man unlocked the front door the next morning I had already been waiting outside in anticipation for fifteen minutes. I followed him inside and immediately began babbling about what had occurred the previous afternoon down in Los Angeles. I waited for him to share my excitement and to tell me more about the Felt company, his shop, and “El Guapo”. It didn’t happen.

He barely made eye contact, only told me his name when I finally asked, did not seem even vaguely familiar with the bike I was interested in, and even paused before answering my questions as to whether or not he could order the bicycle I wished to purchase. Keep in mind that I was not asking for a discount of any kind and that I told him I was not particularly in a hurry. He took my contact information almost reluctantly and did not walk me to the door as I left.

Almost a week later I called the shop to see if they had any information for me. They put me on hold before passing me on to two different people, each of whom seemed less interested than the man whom I had met there in person the week before. A few days after that I again visited the shop, and was finally told they didn’t think they could get the bike for me.

A week later a friend and I drove to Los Angeles, where I picked up “El Guapo” from Tony. He was excited to see me, introduced me to the shop owner, and again shared more information about the shop, my new bicycle, and more. He even gave me a hug instead of a handshake this time. Now that’s the kind of customer service that turns people into raving fans!

As we made the ninety minute drive back home with my new bicycle tied securely in the trunk of the car, I thought about the events that had transpired in regards to this transaction. It all came down to customer service, something that is so easy to provide and that means so very much. Are you more like Tony, or more like the people who once had a thriving bike shop I’m talking about here?

I’m author, publisher, and entrepreneur Connie Ragen Green and if you are interested in learning more about getting your message out to the world please take a look at my recent and popular training on How to Sell Yourself and Your Stuff. Please connect with me on Twitter and join my list (on the right) to learn more about building your online empire.