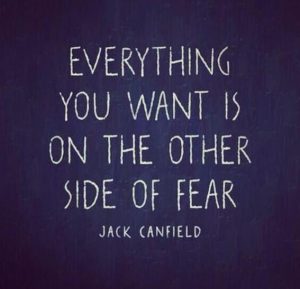 Is the Fear of Criticism Holding You Back?

During the spring of 2006 I had just started my online business. Simultaneously, I had moved from an area where I had lived off and on for most of my life, most recently spending fourteen years in the same house, to a brand new area about thirty miles north of there. It was a new housing development, so everyone was new to the area and moving into our custom built homes as each one was completed and ready to be occupied.

It was on one of my early morning walks around the neighborhood that I met a woman I will call Anne. She had taken a six month leave of absence from her job as a hospital administrator to have some minor surgery, to get moved into her new home, and to get her six year old twins settled into first grade. Anne’s husband was an attorney working in downtown Los Angeles, so it fell to her to make sure everything was running smoothly on the home front.

Anne confided in me that she disliked her job, and that over the past five years, since returning to the hospital after her twins were born that it had become almost unbearable for a variety of reasons. It was also a two hour commute each way, so most days she was away from her home and her family for more than twelve hours. When she did return home she was too exhausted to enjoy her family, and the next morning it started all over again. Weekends were a frantic time of catching up with everything that didn’t get accomplished during the week. It was a hamster wheel of unhappiness she just couldn’t break.

When Fear of Criticism Creeps Into Your Thinking

During one of our walks I told her about my previous life as a classroom teacher and real estate broker/appraiser, and that I had decided to walk away from those two careers and get started as an online entrepreneur. Anne still had a few months of her six month leave of absence from her job and I told her that was plenty of time to see if this world of entrepreneurship was for her as well.

What I haven’t explained here is that Anne had an idea in a niche that was a million dollar business model. 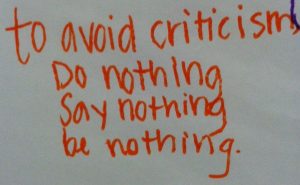 Because of her education and years of work experience she would have been credible immediately and could have written her own ticket when it came to online entrepreneurship.

Now she loved the idea of being able to work from home and slowly replace her income, and the fact that she would no longer have the four hour daily round trip commute time or the working conditions that were stressing her out and making her existence so unhappy much of the time. But then she asked me a few questions that told me so much about why this business would never work for her. Anne asked,

“What if someone I know would read something I had blogged about or spoke about and thought badly of me? What if they told others what I was doing? And what if people I don’t know criticize me for sharing my knowledge and experience? What would I do?”

And there it was…fear of criticism.

We all struggle with fear at some level or another from time to time. But in Anne’s case this fear of being second guessed or criticized would keep her from changing her life and being there for her husband and children. Her life was not working for her, yet she was not willing to make the necessary changes because the fear was gripping her mind and her heart on such a deep level.

This resonates with me because I lived in fear for much of my adult life. I had all of the typical fears – of not having enough money, of illness, of death, and yes, of criticism. Even though one or more of these may still find its way into my thinking from time to time, I have been able to banish them from affecting my life. It’s a huge weight off my shoulders, to be sure. The tools and habits I have developed over this past decade serve me well in this area. Entrepreneurship has changed my life is so many wonderful ways.

I was reminded of this story about my neighbor while speaking with a client earlier this week. I had gently recommended once again that she network in her community to get her online business off the ground. Her fear of criticism surfaced when she confided that she was afraid others who knew her from her local career would say negative things to others in regards to this new business she was starting.

It caught me off guard because I thought that I always made it clear that others will likely have something to say about what we do, no matter what. And that we must meet that gossip (that’s exactly what it is) with strength and confidence and the knowing that the goals and dreams we wish to achieve are so much greater and more important than what anyone else has to say about us or what we do.

If your family, friends, neighbors, co-workers, or anyone else criticizes you, give them my favorite one word answer…

I taught that to hundreds of students during my twenty years of teaching, as well as to my own friends and family members. Whatever someone has to say negatively about me or what I am doing, that’s my answer.

You may be wondering what happened to my neighbor, Anne. She went back to the job that no longer served her after her leave of absence was up. She hired a nanny to help care for the children, who are now almost eighteen years old. She and her husband divorced two years after I met her. He remarried a few years later and took primary custody of the twins. She lost her home to foreclosure a couple of years after that and moved into an apartment closer to her job.

Fear charted the course of her life. What could have been, never was to be. The dreams she and I had in common all those years ago manifested very differently for each of us. Yes, I continue to be criticized for saying what I think in many areas of my life.

What do you think about the fear of criticism for entrepreneurs?