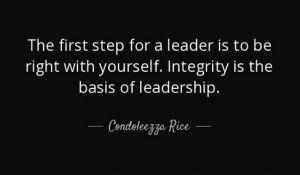 You may have seen either the original or the remake of a film called “True Grit”, a western that starred John Wayne as U.S. Marshall Rooster Cogburn in the 1969 version and Jeff Bridges in the starring role in the 2010 remake. The plot involves a young girl wanting to hire Cogburn to find the man who killed her father. When asked why Marshall Cogburn is the only person she wants for this job she answers that she has heard that he has “true grit”. I think of people who have the leadership traits of integrity and strong character as ones having true grit.

Being a gritty person means that you stick to your goals despite numerous issues, problems, setbacks and failures. The person has firmness of mind, determination, and unyielding courage. Are you a person of “true grit”? This continues to be a goal of mine and one that I focus on with every action that I take each day.

Being an entrepreneur requires a certain inner strength that I did not possess during the more than twenty years I worked as a real estate broker and appraiser and also as a classroom teacher. Perhaps these traits and characteristics were always present inside of me, but seldom did I find the courage to bring them to the surface in any form. It was only when I came online in 2006 and discovered that it was entirely up to me to make things happen in my life and business that my character began to develop.

Think about the way you go about your daily life. You may think of yourself as being a honest person, but do you live in integrity? These are two separate things, I believe. Living in integrity requires you to go above and beyond when it comes to dealing with and interacting with other people. It means that you go that extra mile to make sure the right thing is done. It also means that you seek out solutions to problems, both your own and those of people around you who can use your help and look for ways to not only solve problems but to enhance the situations you encounter so that true growth occurs. This is a tall order, but one everyone can embrace.

These days I am someone others look to when they have questions, issues, and concerns around their everyday lives. Recently a friend’s husband contacted me to ask my opinion on a job change he was considering. He told me that he and his wife had discussed it and that they had come to the conclusion that I was the person to discuss this situation with so they would have the best chance of success. On that day I realized that I had manifested life I had wanted. My life’s work is to assist others in their decisions, specifically around entrepreneurship and more generally with their lives. This type of leadership is possible when you focus on your goals and dreams each and every day.