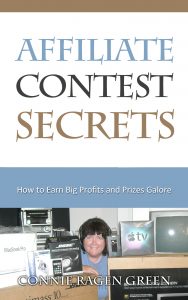 Affiliate contests make our online businesses more fun, but they also make good business sense. An affiliate contest is one in which the product creator (vendor) offers prizes for those who make the most sales during a specific period of time. I first became aware of these as a new affiliate more than a decade ago, and this is what quickly catapulted me to “super affiliate” status. A super affiliate is someone who can help a product creator with their product launch, enabling them to make more sales and get more attention than they could on their own. Allow me to go into more details on this.

I learned from the very beginning the importance of only sharing recommendations for the products and services I used and benefited from. I gained a reputation as someone who cared more about the quality of the products I was promoting than the amount of commission or prizes. When I did begin to participate in affiliate contests it was only for the ones that I would have recommended anyway. This led to my increased credibility and visibility among my peers and the internet marketing community.

The first major affiliate contest I won was from Armand Morin back in 2010. He was offering a three thousand dollar program and I was a part of his group mastermind, so it made sense for me to recommend his program to my community of followers. After a couple of weeks of hard work, it was announced that I was the grand prize winner. I was speaking at his event in Minneapolis when the announcement was made, so it was even more exciting. My prizes included a laptop computer, a Bose home entertainment center, some smaller electronics, and the prize I had most wanted to win. This was a complete website and sale page copywriting makeover, something I desperately needed at that time.

After that I began to win affiliate contests regularly, and during a two year period I won fourteen iPads. I’ve also won Amazon gift cards and my favorite, cold cash! Again, I do not look for these contests, I simply join in the fun if the person and the product meets my standards of excellence.

I would encourage you to find the products and services you are using and benefiting from and then to keep your eyes open for any contests that may arise. It doesn’t hurt to ask the product creators and vendors if they have an affiliate contest coming up in the near future. This might even make them more likely to host one based on your suggestion.

I created a training on this called Affiliate Contest Secrets. I update it regularly and include the exact emails and strategies that now have me in the top ten on multiple affiliate contest leaderboards simultaneously. If affiliate marketing is an area of interest to you, then I would encourage you to pursue it through the contests that are available. This will boost your confidence and connect you with others who also take this business model seriously.