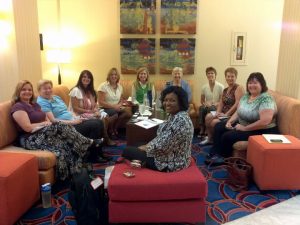 How to Find Affiliates through Networking

I first met Laura West in early August of 2014 while speaking at a large marketing event in Atlanta. The event was NAMS – Novice to Advanced Marketing Systems – and it was held twice a year between 2011 and 2016.

Laura was very quiet and I recognized her to be a fellow introvert. She is a coach and also a fine artist. When we met she told me she was going to create a drawing based on my keynote speech that evening. I was speechless, as no one had ever done anything like that for me. I thanked her and asked her what she needed from me. She said as long as she has the title of my talk she would take it from there. My talk was called “Don’t Over Think It: It’s Just Sunglasses” and based on a real life experience I had earlier in the year.

The drawing came out more beautiful than I could have imagined. After showing it off to as many of the four hundred participants as I possibly could I carefully rolled it up so I could bring it home with me on the plane. I still have it and consider it one of my most joyous treasures.

After returning home I emailed Laura to thank her again and also posted a photo of the drawing on social media.

As happens with many relationships that form at live events, this one slipped away. It was not my intention to allow this to happen and I take full responsibility for letting my connection with Laura to slip away. Life happens, you get caught up with other things in your personal and professional life and the next thing you know years have passed.

Other than being Facebook friends, Laura and I had no ongoing relationship of any kind.

Fast forward to August of 2018, almost exactly four years from when we first met. I was in Atlanta again, this time at Kelly McCausey’s event. And who do you think was in the room when I arrived early on the first day to get my things set up?

Yes, it was Laura West!

By this point in my life I had learned the importance of making new connections and building on previous ones. Laura and I talked for a few minutes and I promised her I would stay in better touch from now on.

On the morning of the second day at the event Laura approached me. We talked for a minute and then she told me about a new course she would be teaching during September. It was called the”Fun and Fabulous Follow Up” 30 Day Challenge and was set to begin three weeks after the event ended.

She handed me a flier that described what the course was about, in great detail and with a bulleted list of the benefits of joining. She gave me a few minutes to read it through and when our eyes met again she took a half step forward and changed the tone of her voice. It was quite intense and I was listening. And then she did something I had only experienced a few times before in my lifetime.

Laura asked me to join the course and to consider recommending it to my community.

She had completely disarmed me and by that point I was more than ready to say Yes! I signed up by the end of that day and gave her my completed form that was attached to the flier she had handed me that morning. You can find affiliates through networking.

Remember that Laura is an introvert. She is also very soft spoken. But when she leaned in to speak just to me and to ask me to join her course and recommend it to others it was as if she and I were the only two people in the world.

My guess is that she’d practiced and refined what she would say before she approached me.

My results? They were nothing short of fabulous and it was definitely fun. Laura showed me how to create a new daily success habit that totally changed me and my business! I don’t even give it much thought most days now. I have my list of people I want to connect with and I make it happen.

It just takes a few minutes to reach out to someone, and if that leads to a sales conversation or one that will culminate in something we both consider to be worthwhile that is worth the additional investment of time. This has all but eliminated any anxiety around reaching out to people I don’t know and my income continues to increase. I have learned that you can find affiliates through networking regularly.

Check out Laura’s course at http://ConnieLoves.me/FabFollowup

If you’re not ready for the course, connect with Laura by downloading her “Daily Action Planner” at no cost at http://ConnieLoves.me/DailyActionPlanner

I want you to do what Laura did with me; find the people who would benefit from your product or course and ask them to sign up, and to then recommend it to their community as your affiliate. This will be life changing and you will improve each time you do it. The relationships you build will be life changing in many ways.

Imagine if you reached out to four people a day, five days a week. If just ten percent of them said yes, you would have two new affiliates each week who would send their people to you to learn what you are specializing in on the internet. At the end of one year you would have a hundred active affiliates!