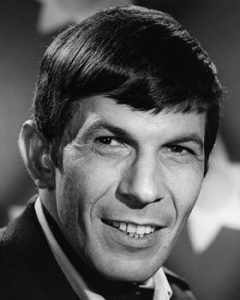 Leonard Nimoy passed away this morning. You may think of him as Mr. Spock from the Star Trek series, but I knew him in a very different way.

Long ago, circa 1985, I was living in an apartment building in the Sherman Oaks section of the San Fernando Valley in Los Angeles. Nimoy had purchased the building just a few months earlier so that his parents would come out from the east coast to live in California. They had lived in Boston for many years and he wanted them closer to him and to his children, Adam and Julie. His children were my age and accompanied their father to visit their grandparents regularly. He had completely remodeled two of the apartments to create a much larger unit for his parents, Max and Dora. They were already quite elderly and spoke mostly Yiddish and Russian, so I seldom saw or heard them during the year I lived there.

But my relationship with Leonard went much deeper. One Sunday afternoon he came out to the pool area and asked me if I could explain to him how I used the laundry area. Not understanding what he meant, we walked over to the area where the washers and dryers were and I told him how they worked. He laughed, and told me that he understood that part, but wanted to know the details of how the tenants were using this area, and what could be done to improve it. I knew that his parents did not use the laundry room, so I inquired as to why he was doing this.

He then explained to me in great detail the responsibility he felt came along with owning an apartment building. He wanted each of us to feel welcomed and comfortable, no matter how long we chose to live there. I told him that sounded very logical, like something Spock would say, and we both had a good laugh about that.

During the next several months he and I discussed many things, including his marriage, which was coming to an end. He and Sandra, who passed away in 2011, had been married for more than thirty years, had raised two children, and were now friends and roommates. He longed for more, but that relationship was not to be revived. He asked me what I thought about this and I told him that he deserved to be happy and to find someone new to love. I also told him that it had been my experience that you must wait one full year between relationships if they are to be given any chance at success.

A year or so later they divorced, amicably, and a year later he met Susan. They married a year or so after that and were still together at the time of his death, just hours ago as of this writing (February 27, 2015). This is the first time I have ever shared this story with another living soul, out of respect to him and his family.

I’m not yet sure what lessons are to be learned from Leonard Nimoy’s life, but I am sure I will be giving it lots of thought in the days and weeks to come. For now, I leave you with his last public words, posted on Twitter just a few days ago – “A life is like a garden. Perfect moments can be had, but not preserved, except in memory. LLAP.” Live long and prosper, Leonard, and thank you for touching my life.

Note: Leonard did a guest appearance (voiceover) on The Big Bang Theory show and here is the link to the video of the scene from that episode. I believe you will enjoy it, even if you have seen it before. The cast paid tribute to him at the end of this week’s show.