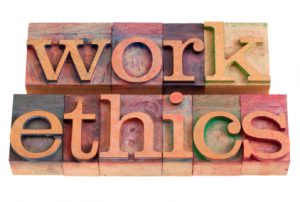 The definition of the term “work ethic” is based on the principle that hard work is intrinsically virtuous or worthy of reward. This is a noble concept, and it goes much deeper than just the cursory thoughts any of us have given it. But the question I am pursuing is whether strong work ethics are something we are born with and inherent in our personality, something we can instill in our children from a young age, or a trait than can be learned and embraced at a more mature point in our lives.

I was raised in a family that emphasized always doing your best when it came to academics, athletics, and daily life. Even though it seemed at the time to encourage excellence and going above and beyond in all of your endeavors, the truth was that this actually fostered and enabled just the opposite behavior. If you failed a test or didn’t make the team it was alright, just as long as you had tried your best. This is where my quest was mediocrity was nurtured and it became my goal.

It wasn’t until I was in the sixth grade that I learned another perspective on life. My family had moved from California to Florida in the middle of the school year and I was adjusting to new people and customs along with a new climate. When my new teacher, Mr. Hurka encouraged me to not only enter, but to prepare for the grade level spelling competition I gave some serious thought to what he was suggesting.

The same girl, Joann, had won the spelling bee each year since the first grade, and Mr. Hurka told me that many students didn’t enter any longer because they believed that they didn’t stand a chance against Joann. He then leaned in closer to speak in a softer voice and said “I think you can win this year.”

Suddenly my world was tipped on edge and new possibilities were before me. With that one vote of confidence from a teacher I hardly knew I was bound and determined to show him I was made of the right stuff to accomplish the task. I studied the list of more than a thousand words over the next two weeks, making more effort than I ever had previously in my young life. I played this down at home, where once again I was told to do my best.

And on that hot and humid April day in 1967 I did win the fifth grade spelling bee. When my mother picked me up after school and I told her she said “Of course I knew you could win. You’re probably the smartest one in the class”. I pondered this statement for a moment and then changed the subject to something less dramatic.

I’m sharing this story with you here to make a couple of points. One, you can instill values such as work ethics in a child by having the right series of conversations over time. The ones I received the majority of the time did not do that for me, whereas the teacher’s words led me in that direction.

Second, even if work ethic is inherent in your personality, it must be nurtured on a daily basis in order for it to take hold.

And finally, you can develop strong work ethics later in life. I know, because that’s what I began doing when I came online over a decade ago and what I continue to do each and every day. It has changed my life and made many things possible that I never imagined could be a part of my life experience.