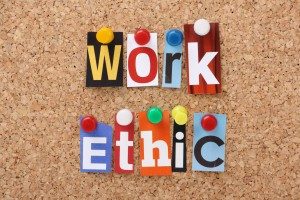 Years ago I met a man on a flight between Los Angeles and Chicago. He asked me if I knew what people from most of the United States thought about people who were from California. I shook my head, but then attempted to guess. Perhaps they thought we had it too easy because the weather was so favorable, or that we were a little crazy or liberal, or that we all wanted to become movie stars. No, none of these was what he was about to share with me.

This man told me that the perception of people from the Golden State was that we didn’t follow through and do what we said we would do, and that we lacked a strong work ethic. This surprised me until I gave it further thought.

While I was in law school in New York during the late 1970s my fellow law students regularly teased me for being too “laid back”, meaning that I was more casual in my attitude, the way I dressed, and how I approached life in general. It was true; my jeans and long shirts were comfortable and I didn’t feel like I needed to impress anyone while I was a student. Also, I was more easygoing than the people I met in New York and took most things in stride. The ability to be unflappable and non-confrontational seemed to be desirable traits in my way of thinking. But I believed I was just as serious and studious as my peers.

But the part this man mentioned about Californians not possessing a strong work ethic? I would have to take issue with that comment. Although I had never thought of myself as a hard worker, I was always willing to do what it took to accomplish the task at hand. Could it be that I did not fully understand what he meant by the term “work ethic”?

It was only a few months ago that the phrase popped up in my life once again. It when I watched a video with actor and motivational speaker Wil Smith, where he brought up how his “ridiculous work ethic” ensured that he could always win a challenge or a contest, and achieve his life goals and dreams. This video is below. What do think about what Wil Smith says?